Note: This performance contains nudity.
This earthen storehouse—the Butoh-kan, survived the upheavals of 150 years ago, escaping pristine from the fires of the riots as if it were sacred ground protected by the divinity of water. Following the aspirations of this generation, I would like to present Butoh which offers the pure bright energy of water—the great source of all life and healer of beings.

Hisoku is a Japanese color, the mysterious beautiful sheen of Celadon porcelain after it emerges from the kiln miraculously transformed by the flames into a pale turquoise blue. For me, Hisoku is bound up with aqueous images: wellsprings, waterfalls, tears… In Japan, colors are not just designators of hue, but are profoundly bound up in delicate sentiments, premonitions, intonations, and affections.
I would like to go with the audience to touch that which lies at the depths of all that we hear and see.

Butoh is avant-garde yet imbued with an ancient unique Japanese physicality. Together with the many encounters in this long-awaited theatre, hoping to benefit all afresh, I dance with all my heart and soul. 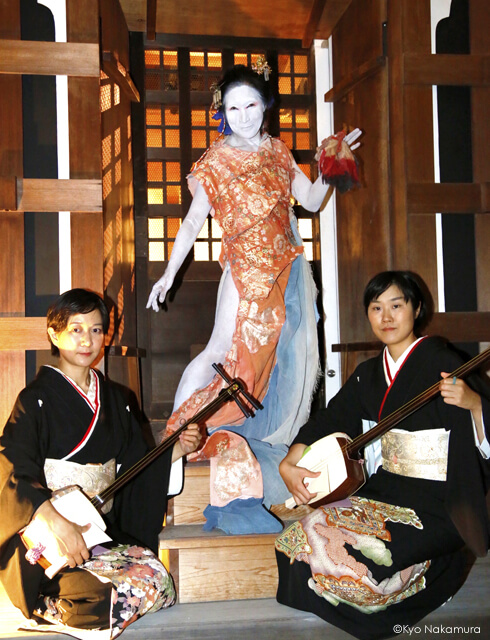 Profile:
Butoh Dancer, Choreographer, Butoh Company Kiraza Artistic Director, Director of Ima Tenko Butoh Studio
In 1980, Ima Tenko was a founding member of Byakkosha—one of the most acclaimed Butoh groups, performing with distinct recognition both abroad and locally. She also designed and produced costumes for them. With their breakup in 1994, she became an independent dancer. In 2000, she started her own dance workshops and created the Butoh company Kiraza.
Through the exploration of the avant-garde form of Butoh, supported by the Shinto practice of Tamafuri, "reinvigorating the soul," a practice seen at the heart of Japanese performing arts, Ima Tenko explores the frontiers of her own art and self. As an inheritor of Butoh, Ima Tenko uses Kyoto as a base to breathe new life and vigor into the form.
In 2005, her company conducted a tour of Europe, performing in Spain, France, and Germany, receiving success and acclaim in each country.
Every year since 2007, they have been performing to sold-out houses at the historical Gojo Kaikan Theatre in Kyoto. In 2012 and 2013, they also were chosen to perform in the National Arts Festival, sponsored by the Agency for Cultural Affairs, Government of Japan.
At the Culture Venture Competition in Kyoto 2010, her work was headlined in the Kyoto Newspaper as "In traditional Japanese theatre, Butoh performance brings fresh poetry to Kyoto City!" and was awarded the Kyoto Newspaper Prize.
She is a board member of the the “Question of Butoh” forum, producing and giving workshops and lectures in 2015 and 2016.
Limited not to just performing, in recent years she has been nurturing and coaching the next generation of Butoh dancers, producing many performers from her studio in Kyoto.
Her activities are wide-ranging, and she is involved in creating a haunted house for children, additionally creating rural theatre and community-based art projects. She collaborates with with diverse artists and musicians of other genres, and also appeared in the historical film Kakekomi.

Profile:
The Okaeri Shimai are a duo that specialize in performing Nagauta, a form of Japanese music accompanying Kabuki shows, which were the choice form of entertainment for the common people of the Edo Period (1603-1868).
Hayashi Mayumi and Miyazato Arisa started playing Nagauta during college, but are now active throughout the Kansai region, evoking the golden period of Nagauta and imparting the sentiments and sensibilities of the Edo Period to the audiences of today. Though living in this century, they feel an appeal to an element deep within themselves through Nagauta and are engaged in finding that out. Moreover, they wish to share Nagauta with many people.
They have been jointly performing with musicians in other genres, and also collaborating with Butoh dancers. The duo performs at live music venues, retirement homes, and schools, while additionally producing their own recitals.
Using the incorporation of call and response, as well as a self-invented "Nagauta Recorder," the Okaeri Shimai greatly enjoy their lives as musicians.